The game starts with the death of King Arthur, leaving the country without one to rule. In the quest to lift the Excalibur and become the next king, you will be tasked to raise your dragon and build your own army. You will have to do battles, of course, while staying alive by forging alliances in order to build an empire together. You will have to clash between kings in the wars before you can be victorious and claim your right to the throne as the next King of Avalon. Wouldn’t it be worth to try? 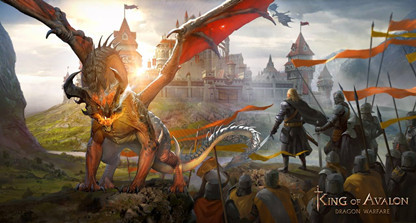 King Arthur has fallen in battle at the hands of his treacherous nephew Mordred. His legendary sword, Excalibur, now awaits its new wielder and the future king of a glorious united nation. Could the new king be you?

Build your own kingdom and find alliances to defend your people. Use your dragons against your enemies and conquest new territories. Become the ruler of every realm!